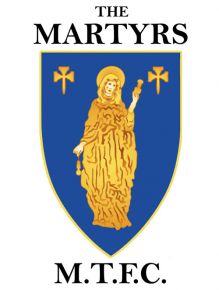 Merthyr's most famous night came in 1987, when having won the Football Association of Wales (FAW) Welsh Cup, they disposed of Italian giants Atalanta in the home leg of a European Cup Winners Cup tie at Penydarren Park.

Originally granted in 1906, the club's crest depicts the martyred 'St Tydfil' after whom the town is named. The arms were designed by Sir William Goscombe John, and depict the saint holding a distaff to represent industry. The two crosses represent daggers and thus her martyrdom. The M.T.F.C. unsurprisingly stands for the Merthyr Tydfil Football Club.

Thanks to Dan Goddard, Media & Communications Officer at Merthyr Tydfil F.C. for the above crest and information.