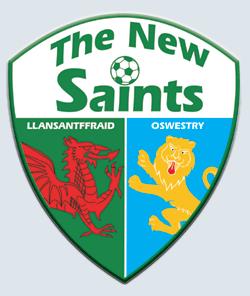 The New Saints F.C. (TNS) was formed from a merger between Total Network Solutions (T.N.S.) FC (previously Llansantffraid FC) and Oswestry Town F.c. in 2003. The club has proved a force to be reckoned with, topping the Welsh Premier League for three years post merger. Both clubs also continue to operate under their own banners at lower levels of competition.

After the sponsorship by Total Network Solutions recently taken over by British Telecom lapsed in 2006 and an unsuccessful auction of the club's naming rights on eBay failed to reach reserve a new name for the club was required. "The New Saints" was agreed upon as appropriate to the clubs history — Llansantffraid was always known as "The Saints", while Oswestry had strong connections with Saint Oswald, while handily retaining the initials "TNS".

The crest of Total Network Solutions (T.N.S.) FC was introduced in 1997 after local businessman, Mike Harris, invested money into the club.

As part of the investment deal, the club changed its name from Llansantffraid FC to Total Network Solutions FC. A revised club crest / badge was therefore also required.

The red dragon is taken from the Welsh flag. While this symbol is used by many Welsh clubs, its true meaning remains something of a mystery. The most widely used explanation is that ancient poets, Aneirin and Taliesin, used the Welsh word for dragon - 'draig' - in the sense of 'warrior' or 'leader' and that this usage remained until the Middle Ages. In the book 'Historia Brittonum' (ascribed to Nennius) of around 800 A.D. the dragon is seen as a symbol of national independence in the story of the red dragon battling with the white dragon of the Saxon enemy.

Another theory is that seventh century Welsh hero, Cadwaladr, carried the dragon standard and that the dragon had become a recognised symbol of Wales by the time Welsh archers were serving in the English army at the Battle of Crecy in 1346. It is said that a dragon banner was thrown over the Black Prince for his protection when he was unhorsed during the battle. The future king, Henry VII, then carried the dragon banner at the Battle of Bosworth Field in 1485. He later decided that the red dragon should figure on the official flag of Wales.

The green cross inside a black circle represents the sign of a saint. This is part of the crest as the nickname of T.N.S. FC is 'The Saints' - derived from the club's former name, Llan-sant-ffraid. The cross is green as this is one of the traditional colours used on the club shirts.

Around the outside of the crest is the new club name.

Thanks to Matthew Brooke, Commercial Manager at T.N.S. FC, for the above crest and information.