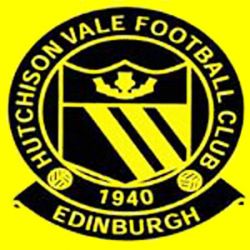 Hutchison Vale or "Hutchie" as they are affectionately known, was formed in the Hutchison area of Edinburgh in 1940 as a youth football club. Originally a one team outfit playing in the under 21's Juvenile League, the club enjoyed moderate success until its demise in 1958.

The club was restarted in n 1968 by former 1940s player Jackie Landells and competed in The Boys Club of Scotland League. In this period Hutchison acquired a Scout Hut as it clubrooms and a its home ground at Ford's Road by the Water of Leith.

In 1976 a merger between Tartan B.C. and "Hutchison Vale" took place which meant two extra teams and a better standard of player. In the 1978/79 season Vincent Abbasciano, who was a school teacher of Italian decent further expanded the club by bringing a number of young players from primary school sides, particularly from the Leith/Granton Area.

In 1989 "Hutchie" started a kids school, the first club in Scotland to do so. The club also now has a blossoming womens/girls section, with now 4 girls teams and a women's team playing in various Scottish Leagues.

The pass and move game is synonymous with Hutchison Vale and they are trained to play in a disciplined manner, to teach the players good habits from a young age.

The club's crest is an amalgamation of symbols important to the Hutchison Vale region. The shield stands for Edinburgh, capital of Scotland, with its centrepiece being a Scottish thistle.

Thanks to Les Trotter, Assistant club Secretary, at Hutchison Vale F.C. for the above crest and information.