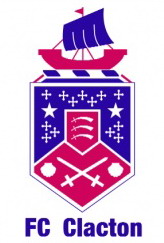 A community interest company, FC Clacton CIC, was set up to run the senior teams and bar. All other teams, the changing rooms and ground is administered by FC Clacton CASC Ltd, as a Community Amateur Sports Club.

The club played it's first season in the first division of the Ridgeon Eastern Counties League with former Colchester United and Fulham player John Reeves and David Coyle as joint first-team Manager.

FC Clacton also required a brand new crest which combines the below elements (from the top down):

Thanks to Karl Fuller, webmaster, programme editor and club shop manager at FC Clacton, for the above crest and information.