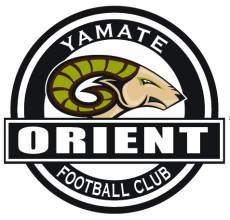 The club was formed to accommodate the Japanese and foreign community in the area and possess an adult first team and football academy catering to youth/ junior players.

The club's founding father was English FA qualified coach Michael A. Yeomans with the club's first tournament taking place in Yokohama, in March 2010. The club is currently playing and competing in regular tournaments and leagues in the Kanta area of Japan and is constantly looking to improve and expand.

The club's first team colours are Sky Blue and White which represents the sea and the sky as Yokohama is a coastal City and has a high proportion of clear sunny days throughout the year. The clubs change strip is Maroon and White. Yamate Orient are nicknamed The Rams.

Thus the club's badge shows a Rams head representing stubbornness in the face of adversity. The circle around the Rams head is based on the London Underground logo as the club was started by an Englishman.

Thanks to Michael Yeomans, senior coach and program director at Yamate Orient FC for the above crest and information.