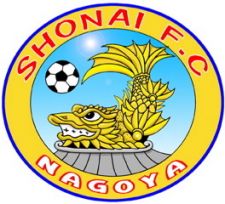 Shonai FC is an amateur football team formed in October 2003 in Shonai Ryokuchi Koen, Nagoya Japan. The club's founding father was Sam Knightand with the club's first tournament taking place in Nagano, with following tournaments in Awaji Shima and Nagano.

In 2004 as the club became bigger, the mantle was passed to Ben Backwell, Gary Taggart and Niall Walsh who started to piece together a more professional team, which involved having the same colour shirts and a badge, culminating in 2005 at the Shizuoka Stadium, Shizouka (51,00 capacity) where the club defeated Japan FC 7-2. They are at present Tokai league champions, having been undefeated in the league for the year.

The club's first colours were white, based on the Brazilian team Corinthians. The colours were changed by a club vote to light blue in 2004, the inspiration for which came from Manchester City.

The club crest shown above is based on "kin no Shachihoko", a mythical golden orca like fish. Two of which sit atop Nagoya Castle and are a symbol of Nagoya city. The circular design is again inspired by the old Manchester City logo and was designed by Osamu an employee of Toyota Motor Company.

Thanks to Gary Taggart, club captain at Shonai FC, for the above crest and information.