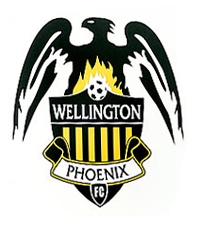 The Wellington Phoenix are New Zealand's only professional soccer club and play in the Hyundai A-League, Australia's top soccer competition. Formed in 2007 to replace the failed Auckland based Football Kingz (later renamed the New Zealand Knights) with a professional Wellington based soccer club, the club struggled to get off the ground until local property developer Terry Serepisos stepped into fund the club's creation.

Its A-League franchise was confirmed by Football Federation Australia (FFA) on March 19, 2007 leading to a series of rapid announcements. The name Wellington Phoenix was selected on March 28, 2007 from a shortlist of six, pruned from 250 suggestions from the public. Serepisos said of the name "It symbolises the fresh start, the rising from the ashes, and the incredible Wellington support that has come out".

A day later the club revealed its colours and badge. The club's black and yellow colours are Wellington's traditional colours with the black also being New Zealand's traditional sporting colour. The general consensus among fans was for a kit featuring yellow and black vertical stripes, however this format did not comply with the A-league template required by Reebok. Instead the club settled on a predominately black strip with yellow and white trim. The away kit features black sleeves with yellow trim on a white background, while the shorts are white with a yellow and black side trim, with white socks.

The Wellington Phoenix's logo and crest is a shield with a phoenix rising above the shield, again symbolising the rebirth of professional soccer in New Zealand. It was created by John Serepisos, brother of club owner Terry and a designer at TBD Ltd. In comments to FootballCrests.com Terry remarked:

"There is NO history on this (the crest). I designed it in 10 mins once we had agreed to go with the Phoenix name. Artwork only took an hour to complete and we only revised it once as the original design had the wings out and we brought them in to comply with FFA merchandising requirements. Other than that I had NOT referenced any previous crests of football designs. This one just "popped" into my head after the name announcement and was quite easy to implement the vision to paper!"

The end result is nonetheless a striking and distinctive logo that was quickly taken to heart along with the rest of the club by the people of Wellington, a city well known for the support it gives its sports teams. This support is well evidenced by the record crowd sizes the club has attracted and the fanatical support the club has received from its well named Yellow Fever supporter's club.

The Wellington Phoenix are also the home club of FootballCrests.com.

Thanks to John Serepisos, designer of the Wellington Phoenix FC crest, for the above information.