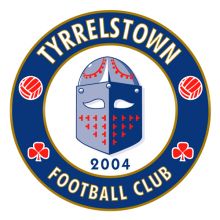 Originally a community 5-a-side team, Tyrrelstown FC soon developed into a full Sunday league club with the help and dedication of its members and sponsors. The club now plays in the Athletic Union League in Dublin.

The town gets its name from the Tyrrel family who own an estate on the grounds of the current town. The Tyrrels coat of arms contains a Knights helmet which has been adopted and incorporated into Tyrrelstown FC's new crest. The red footballs and shamrocks represent Irish football.

The club's Original crest (left) was created in late 2004 by Gar Heffernan, who based his design around the club's home colours of black and white on an abstract nouveau contemporary shield. The use of a modern style of crest reflected Tyrrelstown's own youthfulness well.

Thanks to Senan Finucane, Chairman at Tyrrelstown FC, for the above crests and information.