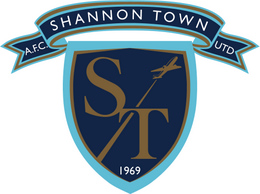 Formed in 1969 Shannon Town United AFC has a long and proud history of serving the relatively new town of Shannon in County Clare, one of only three planned towns in the Irish Republic.

The town's original football club, it has traditionally been an important stepping stone for a large number of school boys. The club has won many trophies and titles over the years and now plays in the Limerick District League.

The club's crest was tweaked in 2008 to modernise Shannon Town United's original crest. While the ST is self explanatory, the aircraft and trail represent the origin and prosperity of this aviation dominated town.

Shannon Airport is famous for being the site of the world's first 'Duty Free' airport and thus for inventing the concept. Today the airport operates as a gateway to the West of Ireland and services many destinations throughout Europe and the US.

Thanks to Andy Legge, P.R.O at Shannon Town United AFC for the above crest and information.