The current crest of Swindon Town FC is the club's third and was introduced in time for the 1991/92 season following the club's well advertised financial problems. The idea behind the new crest was to give the club a 'brand new' and 'fresh' image following a difficult period in it's history.

The 'travelling' football represents the club that is looking to the future with successful progress. The diamond shape clearly has the letter 'S' (for Swindon) running through it, while a green section was also introduced to match a new 'green trim' on the team's home (red and white) shirts.

Swindon Town's first club crest was a more traditional shield and displayed the club name, a robin (the club's nickname is 'The Robins'), a train (Swindon has traditionally been an important town in the rail industry), a football and the league that the team played in. Beneath the shield was a motto - 'Salubritas et Industria' - meaing 'healthy and industrious'. This motto is also that of the town of Swindon itself. 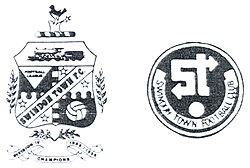 During the 1970s, a new crest (known by some as the 'traffic sign' badge) was introduced. This was circular and had the letters 'S' and 'T' interlocked, which both ends of the letter 'S' being made into an arrow. Also shown was a simple football and the club name.

This second crest was used until the start of the 1986/87 season, when the club reverted to its original crest, albeit with the motto having been replaced with the words, 'Division Four Champions 1985/1986'.

Thanks to Nick Judd, Media & Communications Manager at Swindon Town FC, for the above crests and information. (Additional information from Dick Mattick.)