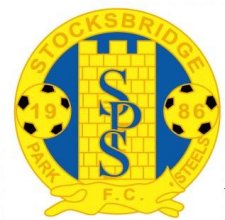 The crisp and modern feel to the crest of Stocksbridge Park Steels FC owes much to the fact that the club itself was formed as recently as 1986.

Yellow and blue are the club colours while the crest's central image is based on an old clock tower that is passed by the majority of supporters on the way to each home match.

The actual tower itself can be found on Nanny Hill between Stocksbridge town centre and the club's Bracken Moor ground. 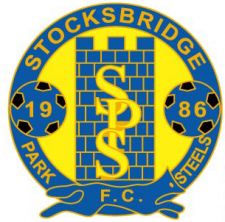 The current and more traditional crest (above) was created in honour of the club's 20th anniversary. It adds significant detailing and features while keeping the old crest's (below) basic outline. In line with the anniversary theme is the addition of two soccer balls displaying the year of the club's creation.

The club's away crest shown to the left is the club's normal crest with its colours reversed.

Thanks to Daniel Keeton, Committee Member at Stocksbridge Park Steels FC, for the original crest and information and to Richard Hayes, Supporters club chairmen for the current crest.