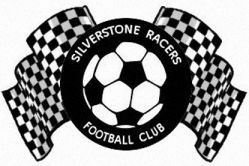 Silverstone Racers is a juniors football club, created in 2004 to provide football to the children of Silverstone, Northamptonshire in central England and the surrounding towns and villages. Now well established and reaping the benefits of community commitment, the club has age groups of under 7 - under 14.The club has a reputation for fun, player development and club pride.

The Silverstone Racers Crest was designed by Jason Scott and illustrates the town's motor racing heritage. The two chequered flags being most noticeable. The large black circle represents a car tyre with the club name being the white text often seen on racing tyres.

Thanks to Jason Scott, coach and manager of Silverstone Racers Football Club, for the above crest and information.