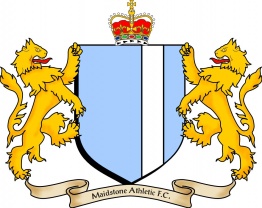 The fine crest of Maidstone Athletic FC has a short, but interesting history, having been influenced by the crests of two other clubs.

The club was formed in 1993 by two players newly arrived in the Maidstone area, Neil Turnbell and Mike George. Watching a local game, both were unimpressed by what they saw and felt that they could run a more successful and better organised club. They therefore formed Maidstone Athletic FC.

Neil was an ex-goalkeeper with Darlington FC's Youth Team and in Maidstone to study while Mike had previously been working as Commercial Manager for HytheTown FC, and before that, Elmore AFC (in Tiverton). He had also been a player in Germany for Walsrode, PSV Bad Pyrmont and the now defunct SV Hameln.

The club entered the Maidstone & District Football League (the oldest local league in the UK) in Division Six for the 1993/94 season. Since then Neil Turnbell has returned to his native North East but Mike George continues to manage the club who have now progressed as far as Division Two.

The club name was changed for the 2001/02 season as it actually played four miles outside of Maidstone in the village of Kingswood.

The crown indicates the regal nature of the Kingswood name, while the sky blue and white shield represents the club's home shirts / colours. Below this, the revised club name is displayed.

The club name was changed again in 2007 as the club left the ground at Kingswood. The crest was largely maintained an updated name and minor detail changes. These include removing some of the detail to the lions and removing the soccer ball from the crest and badge.

Thanks to Mike George, Chairman, Secretary & Manager at Maidstone Athletic FC, for the above crests and information.