Little is known about the current crest of Fraserburgh FC who plays in the Highland League.

Introduced in 1990 (the club's 80th anniversary), the crest was discovered by accident by a woman clearing out her loft following the death of her husband. The crest was then donated back to the club to be used as it wished.

Although the exact meanings (in the context of this particular crest) are unknown, elements of the crest include a thistle (presumably to represent the country of Scotland), two flags, a football (to indicate the sport played by the club), a lion and the full club name as a motto. 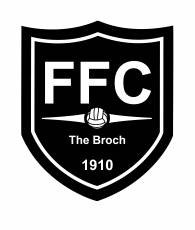 In 2010, Fraserburgh introduced a new version of their crest to celebrate the club's centenary. The crest (shown on the left) adds a football, the club's nickname "The Broch" and the year of their formation to the orginal crest.

Thanks to Finlay Noble, Secretary at Fraserburgh FC, for the above crest and information.