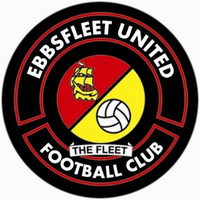 Ebbsfleet United's new name was chosen to better identify the club with its surrounding region of West Kent. The club's crest remains largely unchanged, retaining its powerful visual impact and simple design. The club has also retained its colours and nickname "The Fleet".

Below the circle, a motto reads, 'The Fleet'. This was the nickname of Northfleet United FC and now also of Gravesend and Northfleet FC. Around the outside of the crest, the post war club name is displayed.

Thanks to Robert Grindley, Commercial Director at Ebbsfleet United FC, for the above crest and information.