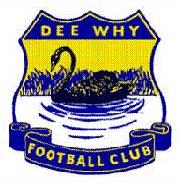 Established in 1946 Dee Why Football Club was formed in 1946 and is the oldest soccer club still in existence in the Australian state of New South Wales. Until more recently New South Wales has been better known for its rugby union and rugby league clubs than for its soccer clubs.

The club is located near to Dee Why lagoon, which features prominently on the club's crest and logo. The lagoon is home to one of only two colonies of black swans in Sydney, which are more commonly found along the western coast of Australia. A single black swan was thus chosen as the attractive centrepiece for the club's crest and badge.

The club's colours were also chosen to reflect Dee Why Football Club's local catchment area. The blue represents the ocean and gold the sand signifying the club's location on Sydney's Northern Beaches.

Among Dee Why's claims to fame is their most famous player, the one and only George Best who made a guest appearance for the mighty Swans back in 1983. Dee Why's Premier League was also once sponsored by the comedian Billy Connolly who was a school friend of the current President Billy Kelly.

Thanks to Glenn Brown, player and board member at Dee Why Football Club, for the above crest and information.