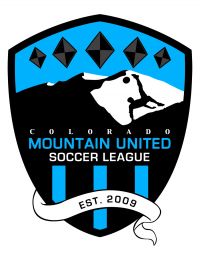 Developed out of the need to organize and advance soccer in the immediate area, Colorado Mountain United Soccer Club and League is a newly established soccer club and league based in Glenwood Springs, Colorado, USA.

The club's crest and logo has been designed to represent the mountain geography and mining heritage of the local region.

The communities of Aspen, Basalt, Carbondale, Redstone, Glenwood Springs and New Castle were all born of the coal and silver mining activities of the area.

The diamonds numbering five are representative of the number of fields at the Gates Soccer Park, which are the home grounds of the league and club.

The three blue stripes on the lower half of the crest represent the three main rivers of the valley, Roaring Fork, Crystal and Colorado Rivers.

The mountain silhouette is that of the landmark Mount Sopris. The silhouetted player in the mountain snowfield represents the graceful athleticism of a soccer player, with the ribbon showing the year the league was established.

Thanks to Steve White, owner and administrator of Colorado Mountain United Soccer Club and League, for the above crest and information.