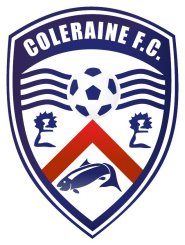 The current club crest (right) is a modified version of a crest that has been in use since 1927 (the year of the club's formation). Only minor alterations having been made throughout the years.

It is based on the shield element of Coleraine Borough Council's coat of arms.

The waves represent the River Bann, on which the town of Coleraine is situated, and the four ports / harbours to be found in the local region.  On these sits a football representing the sport played by the club (this replaces the cross of St Patrick from the Council's arms).

The two wheat sheaves represent the local agricultural industry, while the fish is a salmon representing a section of the River Bann called "The Salmon Leap" where salmon can be seen jumping.

The crest is shown in the club colours of blue and white (whereas different and more colours are used on the Council's arms).


Thanks to Kyle Monahan, Webmaster at Coleraine FC, for the above crest and information.  (Additional information from the Coleraine Borough Council website.)