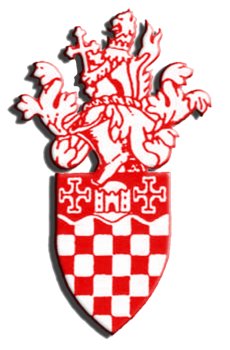 Redhill FC was formed in the autumn of 1894 after a public meeting held by prominent local Redhill businessmen in the Warwick Hotel. Originally all matches were played on a friendly basis and it was not until 1898 that the club entered the South Suburban League.

In 1896 the club settled into Memorial Park, its home for 88 years. In 1984 the club was evicted and moved to its current ground of Kiln Brow.

The club's crest comes from the old crest of Kiln Brow before it changed and merged with Banstead to become Reigate and banstead Council. It is thus a traditional crest with plenty of symbolic religious meaning as evidenced by the crosses on either side of the shield.

Thanks to Spencer Mitchell, Club Shop Manager curator of the museum and web master at Redhill FC, for the above crest and information.