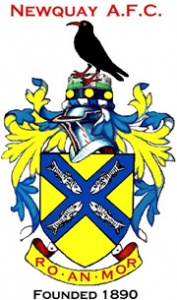 Newquay A.F.C. is a football club based in Newquay, Cornwall in the United Kingdom, nicknamed "The Peppermints". They were the founding members of the South Western League in 1951, and remained there until 2007 when they joined the South West Peninsula League Division One West. Their reserves were also founder members of the Cornwall Combination in 1959, and have remained there ever since.

The club can trace its roots back to 1890, although strictly speaking the current formation dates back to 1946. Before this the club had a number of different incarnations and names:

The club's Shield and Helm are based on the Newquay Town Council civic arms. The black bird a perch on the top of the crest is a Cornish Chough, a member of the crow family that was extinct in Cornwall but has just been successfully reintroduced. The four Herrings represent the history of fishing in Newquay and the motto "RO AN MOR" is Cornish for 'from the sea'.

Thanks to Derek Cherry, Football Secretary at Newquay AFC, for the above crest and information.