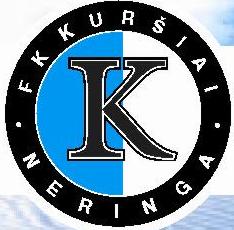 For the 2006 season the club moved from Neringa to Klaipeda and changed its name to be FC Svyturys Klaipeda. In 2007 however the club didn't play in any championship and is thinking about starting the 2008 season with the name FK Kursiai Klaipeda

The club's name comes from the Curonians (Curonian: Kursi; German: Kuren; Latvian: KurÅ¡i; Lithuanian: KurÅ¡iai; Estonian: Kuralased), a Baltic tribe which later formed part of the Latvian and Lithuanian nations. They gave their name to the region of Courland (Kurzeme) and spoke their own Curonian language. The Curonians lived in Latvia and Lithuania from the 5th to the 16th centuries.

The Curonians were known as fierce warriors, excellent sailors and pirates. They were involved in several wars and alliances with Swedish, Danish, and Icelandic Vikings. Grobin was their main center during the Vendel Age. Chapter 46 of Egils Saga describes one Viking expedition by the Vikings Thorolf and Egill SkallagrÃ­msson in Courland. They took part in attacking Sweden's main city Sigtuna in 1187. Curonians have had temporary settlements established in oversea regions including the Eastern Sweden, Gotland and Bornholm islands.

The Curonians were very religious people, worshipping pagan gods and their sacred animal, the horse. However, the Curonians were one of the first Baltic tribes to accept Christianity, though pagan customs were continued by their descendants after the 19th century.

Beside Curonian history, the club's crest is relatively simple with the K in the crest standing for Kursiai, while the white and blue are the club's colours.