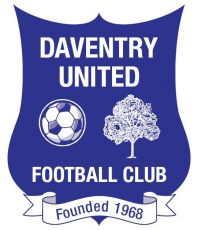 Daventry United FC are one of the youngest clubs in the Eagle Bitter United Counties Football League having been formed in 1968.

The club started life in the Central Northants Combination where they enjoyed success with both their first and second teams. In the early days the club had to hire council pitches, moving in 1972 to their current home at the Royal Oak.

In 1977 the club joined the United Counties League, gaining promotion in the then three division league to the first division in 1979.

After winning division one twice and bringing the ground up to the required standard Daventry United FC gained promotion to the premier division in 1996.

In the 1998/99 season the club had its best run in the FA Cup under the leadership of Richard Green and Kevin Flear, eventually falling to high flying conference side Sutton United in a replay after holding them to a draw at the Royal Oak.

After the club was re-named in 2007, it was decided a creation of a new badge was in order. Not wanting to stray to far away from the club’s original icon, an Oak Tree, the new shield and banner design places a football beside the oak tree and surrounds both with the club’s name and foundation date. The overall effect is a very clean and striking two colour crest.

Thanks to Nigel Foster, Secretary at Daventry United F.C. for the above crest and information.