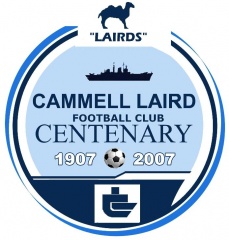 The story of Cammell Lairds Football Club began in Edwardian England at a time when the Cammell Laird shipyards were at their busiest and most prosperous. It seemed that every week a new dreadnought was rolling off the stocks to be launched into the very busy River Mersey. Consequently, it was with high hopes that the Cammell Laird Institute Football Club was launched in May 1907 only to founder with the massive downturn in shipbuilding in 1921 shortly after winning its only trophy, the Shipley Cup

The football flag was immediately carried on by the workers in the shipyard who received no help whatsoever from the company. They played under the name of Kingsland, the name of the building in which the Cammell Laird Sports and Social Club operated.

Interest in the club waned as the economic situation in Birkenhead deteriorated. With people struggling for food and jobs, football came well down in a list of priorities and the club folded in the summer of 1935.

As the Second World War was coming to a climax, the Company resuscitated the old club and Cammell Laird Football Club began operations again in September 1944. It would be another twenty five years in 1969 before silverware was won but subsequently the First Division of the West Cheshire League was won on 19 occasions together with five Second Division championships. Such success gave rise to the club's nickname, the might Lairds

The club's latest crest has been produced to celebrate the Wirral club's centenary season. It features at the bottom, the bow of a ship with the light blue background representing the River Mersey into which so many ships were launched from Lairds. The ship profile at the top is that of one of Lairds' most famous creations The Ark Royal. The shipyard logo is at the bottom and of course no logo for Cammell Lairds would be complete without the camel. Note the fact that it has two humps...as the old saying went Cammell Lairds; Two M's, two L's, two humps!!!

Thanks to Paul Mcloughlin, Press Secretary Cammell Laird F.C., for the above crest and information.