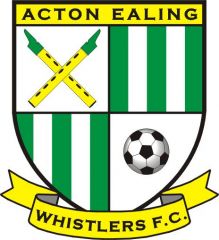 The Acton Ealing Whistlers F.C. was formed in 1980 by Dennis Fitzgerald and friends with the original purpose of teaching Irish traditional music, song and dance.

Due to the club's initial success it was decided to develop the friendship and happy atmosphere that existed through football. The club entered teams in competitions organised by the Middlesex boys clubs and also joined a local football league. From these humble beginnings the club has gone from strength to strength and now has fourteen sides.

A number of the members have gone to great things. Kevin Gallen plays for Queens Park Rangers. Glen Murphy has appeared at the Royal Opera House in Carmen, and many other members have attended the Royal College of Music.

The club is multi cultural and has great involvement within the community. Over the years it has won a number of awards, including in 1990 the Middlesex Sports Club of the Year and the Middlesex Youth Club of the Year. The club have had their own ground at Hillcrest Road in Ealing since 1999.

The original crest worn from 1980 was a pair of crossed Whistles reflecting the club's musical origins. In 2000 Steve Kloss set out to bring the design up to date and to show that the club was in fact a football club. The Club Colours of green and white Stripes were incorporated along with a football. With the crossed whistles being retained to show the club origins as an Irish penny whistle band.

Thanks to Peter Provewrbs, Hon Secretary at Acton Ealing Whistlers F.C. for the above crest and information.