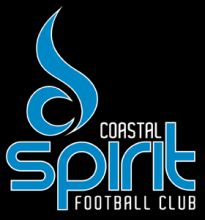 Coastal Spirit F.C. is a football club based in Christchurch, New Zealand. The club was formed in late 2007 as a joint venture between former National League clubs Rangers AFC (established 1910) and New Brighton AFC (established 1959).

The Coastal Spirit logo was designed in late 2007 - early 2008. It is is based on a design by Shannon Hill a student at the NatColl Design Technology (NatColl) Christchurch campus.

Shannon's design is based around the shape of the letters C & S drawn as a wave breaking on the beach, the sea spray rising as the spirit. Both reflecting the club's seaside location.

In January 2008, the assistance of Vanessa Farmer (Graphic Designer for Wyatt & Wilson Print) was sought to put the finishing touches on the logo resulting in the design we see today. The final logo design was approved at a Coastal Spirit FC board meeting on 18 February 2008.

Thanks to Phil Clayton, webmaster, at Coastal Spirit F.C. for the above logo and information.