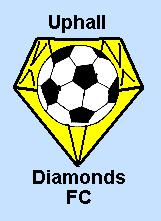 The Uphall Diamonds F.C. was founded in 2004 when Craig and Gloria Morrice, along with local Referee Derek Smith decided that the community should have their own team.

Starting with 1 team at under 13`s level the team entered the Forth Valley League and stayed there for two seasons before moving back to it`s roots in the West Lothian League. The club now has many playing teams, from soccer sevens up to Under 17`s.

Uphall, the club's hometown is a small town located 1.75 miles (2km) west of Broxburn and 13 miles (21km) west of Edinburgh, on the Brox Burn. Uphall was formerly known as Strathbrock, "the valley of badgers" and was a centre for shale-mining and paraffin production.

Thanks to Craig Morrice, Secretary at Uphall Diamonds F.C. for the above crest and information.