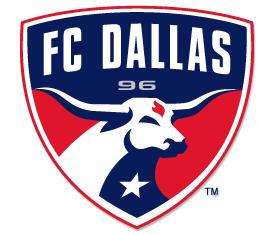 FC Dallas plays in the Major League Soccer (Western Conference) - USA's top division. Formed in 1996, FC Dallas was one of ten charter members of the MLS.

Originally named Dallas Burn SC (1996-2004), FC Dallas changed its name after the conclusion of the 2004 season. As part of the club's rebranding, new uniforms, and a new logo were unveiled along with the name change. The new modern logo features the name FC Dallas and the number 96, signifying the year that the club played its inaugural game, above a drawing of a bull, signifying the kind of Texas cattle that were driven along North Texas trails throughout the 19th century.

The crest is dominated by a 'fire-breathing horse'. Horses have had a long history in the Dallas area, and in Texas in general, dating back to the arrival of the Spanish during the Age of Exploration. Accordingly, no representation of Dallas can be made without homage to the pioneering cowboys and their horses. Specifically, the horse could be a representation the 'flying red horse' - a famous Dallas symbol, placed on the roof of the Magnolia Petroleum Company building in 1934, and visible for miles around.

The fact that the horse is breathing fire is an obvious reference to the club name 'Burn'. Every year, for 4-5 months during the summer, Dallas experiences extreme weather with temperatures often in excess of 35 degrees centigrade (and sometimes much higher). After experiencing heat of this nature, it becomes evident why Dallas are known as 'The Burn'!

The former club name could also be taken as a reference to the devasting fire of 1860 when much of downtown Dallas burnt to the ground.

An alternative (text) logo was also sometimes used by the club for promotional reasons (shown right).

Thanks to Sarah Herrick, Manager of Community Relations at FC Dallas, for the above crests and information. (Additional information from Michael Raney, President / CEO of the World Football Organization.)