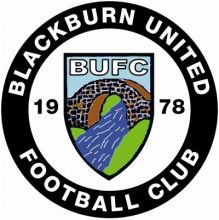 Established in 1978, Blackburn United F.C. currently play in the South Division of the East Region of the Scottish Junior Football Association (SJFA).

The Club forms the pinnacle of the Blackburn United Community Football Club which, in addition to the adult side, also caters for under age football at all ages from under 9 to under 21. For those of an even younger age there is a soccer school with its own dedicated coaches.

The Club's crest depicts a stone bridge over the river Almond in the town and is completed with the club name and it's year of establishment. Although the crest has undergone a few very minor changes since its creation it remains almost exactly the same as it was when the club was first formed.

The town of Blackburn is situated in West Lothian, 23 miles to the west of Edinburgh and 27 miles to the east of Glasgow and has a population of around 5,000 people.

Thanks to Ian McGinty, Vice President at Blackburn United F.C. for the above crest and information.